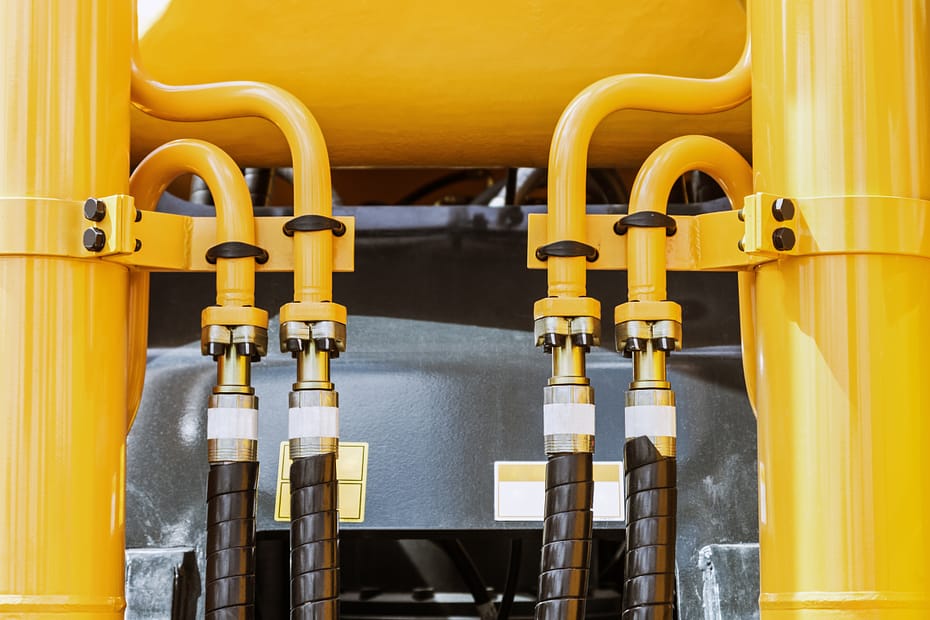 A hose is a hose, right? Wrong!

Many factors play a role in the life of hydraulic hose assemblies. These can include, hose routing, bend radius, torsion, and abrasion.

Proper hydraulic hose routing means taking into consideration the correct length of hose, adapters, proper bend radius, and proper clamping. The purpose is to minimize the stress on the hose and fittings. Hoses will eventually start to leak or could blow apart if incorrect length or bend radius is used. With proper hose routing, you will set your hydraulic hose up for optimal performance, reduce hose costs, and extends service life.

With high pressure hoses like hydraulics, hose failures can cause severe injury to operators. It is extremely important that organic equipment manufacturers (OEMs) utilize proper hydraulic hose routing in their fluid power systems.

Below is a list of our top recommendations that help with hydraulic hose routing issues that OEMs face. This guide can aid in proper routing and installation of hydraulic hose assemblies for various large equipment manufacturing applications.

Consider the bend radius of the hose

In the right picture, the hose is too short not allowing for the hose to have the proper bend radius. This causes strain on the crimp joint. The left picture shows the correct hose length providing correct bend radius. If the hose must bend, it should only bend in one plane. Angle fittings and adapters can be used to achieve this. The left picture shows a cluttered hose routing that could induce unnecessary hose wear. The right picture displays a better choice of routing. The use of adapters helps clean up the routing, which allows for longer hose life and is easier to maintain.

The top hose is far too taught. When routing hydraulic hose, make sure there is a gentle bend in the hose. This will allow for the hose to flex, contract, and expand safely during use.

Be aware of hose routings that have torsion and twisting involved. Hoses should be routed to limit this torsion as it can have a negative effect on the crimp integrity and can reduce hose length.

A good tip to help identify this issue is to look at the hose layline. If there is torsion in the hose, the hose layline will appear twisted. Torsion can shorten hose life.

The proper use of clamps can help relax the hose when there is movement in more than one plane. Installing the correct clamp is important as an incorrect application can cause damage to the cover of the hose. There must also be enough length on either side of the clamp to provide enough room for hose movement.

Support clamps are a good tool to use when trying to limit hose wear and tear due to abrasion. Clamps can be used to isolate hoses and hold them away from abrasive surfaces or environments.

When routing hose, you must consider how the hose will move in the system. No part of the hoses’ movement can exceed the hose bend radius or cause stress at the crimp joint. Both outcomes will cause hose failure.

Choosing the correct fittings on the hose can also improve hose life. In this case, swivel ends are used to limit torsion in the hose. Swivel ends can also aid in maintenance and replacement.

take the guesswork out of it, work with propulse!

At ProPulse, we understand the importance of correct hose routing for large equipment manufacturers. Hose failure can cause severe issues in your agricultural, construction, utility, or material handling equipment.

That’s why we prioritize quality in our manufacturing processes to ensure we are suppling the highest quality OEM hydraulic hose. Our hose solutions include ozone and UV resistant thermoplastic hydraulic hose, rubber hydraulic hose, or even hose accessories like hose wrap or nylon covering to withstand the rigors of usage.

Our expert engineering team will work with you to build the hydraulic hose that is ideal for your specific equipment and routing environment.

ProPulse is proud to receive the Bronze Sustainability rating from EcoVadis for the second year in a row. What is EcoVadis? EcoVadis is the world’s

Twenty-five years ago, Schieffer Co. International opened in Peosta with just six employees in a 12,000-square-foot facility. In the two and a half decades since, the hose manufacturer has changed its name and expanded exponentially. Now known as ProPulse, a Schieffer Company, it employs 130, utilizes 130,000 square feet of space, and is celebrating its silver anniversary in March. “25 years is a long time,” said Jeff Theis, President and CEO of ProPulse, “but I believe ‘blink of an eye’ is appropriate when describing our journey.”

Warning:  This product can expose you to chemicals including Nickel, which is known to the State of California to cause cancer. For more information go to www.P65Warnings.ca.gov.

Warning:  This product can expose you to chemicals including Carbon Black, which is known to the State of California to cause cancer. For more information go to www.P65Warnings.ca.gov.

Warning: This product can expose you to chemicals including Toluene, which is known to the State of California to cause birth defects or other reproductive harm. For more information go to www.P65Warnings.ca.gov.

Before selecting or using ProPulse Products, it is important that you read and understand the following:

Failure to properly repair or replace hose after exposing braid or the reinforcement layer can cause death, personal injury, and property damage. Like each strand in a bridge cable, each reinforcement fiber plays an exact role in the ultimate burst strength of the hose. A minor slice or nick in the reinforcement can result in total hose failure.

The age of the hose does not matter! It is unfortunate, but even hose used one time can be damaged in severe applications. These hose must be immediately removed from service.